Volkswagen have launched an EU research project called 'V-Charge' to look into the near future of automated parking. Six national and international partners are jointly developing new technologies with a focus on automating the search for a parking space and on the wireless charging of electric vehicles. The test vehicles not only automatically looks for an empty parking space, but can also finds an empty space with charging infrastructure and inductively charges its battery. Once the charging process is finished, it automatically frees up the charging bay for another electric vehicle and looks for a conventional parking space. 'V-Charge' stands for Valet Charge and is pointing the way to the future of automated parking. In the USA especially, convenient valet parking is a big hit: you pull up in your car right outside your destination, valet service personnel park it for you and have it brought around again as and when you need it. There is no more time-wasting search for a parking place. The V-Charge project picks up on this idea. Its development goal is fully automated searching for a parking space ('valet parking') within defined zones, such as in multi-storey car parks. There are many scenarios that illustrate the advantages of the V-Charge concept. Take one practical everyday example: a commuter notices that he is possibly going to be late and is thus running the risk of missing an important meeting at his company. With V-Charge he is able to pull up right in front of the main entrance, get out and establish the link to his vehicle via the associated smartphone application. Operating fully automatically, the vehicle has a digital map relayed to it and within the parking area or multi-storey car park autonomously navigates to a parking space. If it is an electric vehicle, the system additionally prioritises a parking bay with an automatic charging facility. Pedestrians, cyclists and other vehicles are identified by the cameras and ultrasound sensors integrated within the vehicle. Therefore, the vehicle is allowed to travel in so-called 'mixed traffic'. The selected parking area neither has to be an enclosed domain nor is any complex technical equipment required. As the electric vehicle nears its destination, the system recognises via local sensors whether the allocated parking space is taken. If it is empty, the fully automatic parking manoeuvre begins and positions the vehicle exactly above the inductive charging spot. When the charging process is complete, the vehicle automatically moves to another parking space, leaving the charging station free for another electric car. When the driver returns to the multi-storey car park, he calls the vehicle back to the starting point via the V-Charge app. The vehicle moves to the defined pick-up location, with the driver not needing to set foot in the parking area or multi-storey car park. 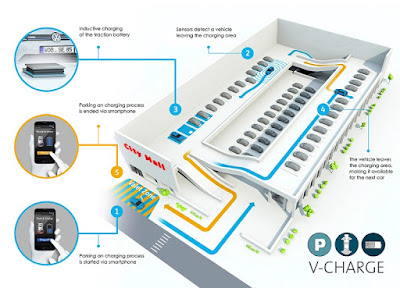 Taking the lead in the international research consortium is the Swiss Federal Institute of Technology (ETH) in Zurich. It is responsible for visual localisation, movement planning and vehicle control (Autonomous Systems Lab division), camera calibration, 3D reconstruction from images and obstacle detection (Computer Vision and Geometry Lab division). Braunschweig Technical University works on the issues of car park management and the vehicle's communication with the technical surroundings (vehicle-to-infrastructure 'V2I'), Robert Bosch GmbH contributes its expertise in the field of sensor technology, Parma University looks after object recognition and Oxford University handles the development of detailed navigation maps of the parking area (semantic mapping concepts). As the sixth partner in the consortium, Volkswagen is providing the platform equipment, safety and control modules, as well as systems for static monitoring of surroundings, object recognition and automated parking. The test vehicle: a network of technical sensory organsThe technical prerequisites largely already exist. During the introductory stage, for instance, it was possible to utilise sensor and camera technologies that are already being used in today's production vehicles. A dense network of sensory devices enables autonomous operation of the V-Charge test vehicle, which is based on a Volkswagen e Golf1. Four wide-angle cameras and two 3D cameras, twelve ultrasound sensors, digital maps and the so-called 'Car2X' technology for the vehicle's communication with the infrastructure ensure that the vehicle's surroundings are reliably detected and recognised. Pedestrians, vehicles and obstacles get identified, parking spaces recognised and measured and then this stream of data is put together in real time to form an overall picture – the task that the technical 'sensory organs' have to fulfil is complex and extremely varied. As continual tests run as part of the research project show, V-Charge is already functional today. GPS-independent indoor localisation, centimetre-exact parking space measurement and 360-degree recognition of surroundings all function reliably, as do the system's reactions to pedestrians and vehicles and the way in which it takes account of traffic moving in line with or across the vehicle's path. 2005: a Volkswagen Touareg called 'Stanley' makes the first move towards autonomyAt Volkswagen automatic motoring moved from being a vision to a field of research at an early stage. 'Stanley' – a Touareg converted in cooperation with Stanford University in California and the Volkswagen Electronics Research Laboratory (USA) into a laboratory that could drive autonomously – was already winning the Grand Challenge competition for robot vehicles as far back as 2005. The next stage of development, in 2007, was the Passat 'Junior', which even then was finding its way through the big-city jungle without a driver – and doing so with such success that it took second place in the Urban Challenge for autonomous vehicles. Given the working titles 'PAUL' and 'iCar', two further Passat research vehicles also demonstrated their autonomous capabilities that same year. While, thanks to intelligent parking assistance with no driver involvement, 'PAUL' slips into spaces perpendicular to the carriageway, the 'intelligent car' makes life easier for the driver in stop-and-go situations and on long monotonous journeys by automatically braking and keeping the appropriate distance. In 2011, the 'eT – follow me!' microvan was launched as the ideal vehicle for delivery services. One real-life scenario: If the driver walks from house to house along a street delivering letters, for example, 'eT' follows him on quiet electric paws like a well-trained dog to ensure his mailbag is constantly replenished ('FollowMe' function) – or stays on his spot like a good boy until receiving the electronic 'come to me' call. Also taking to the stage of autonomous motoring in 2011 was the 'HAVE-IT' (Highly Automated Vehicles for Intelligent Transport), a Volkswagen AG contribution to the research project of the same name funded by the European Commission. The Wolfsburg engineers had developed for the Passat Variant a 'temporary autopilot', which set the best possible degree of automation for driving on motorways and similar roads based on the driving situation, surroundings, the driver's condition and the system status.