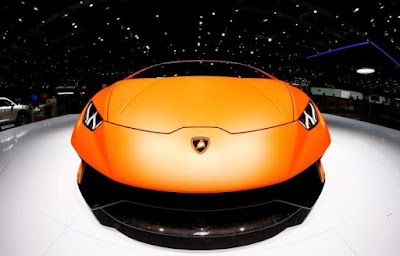 Lamborghini is open to an all-electric addition to its line-up of luxury sports cars, its chief executive said on Wednesday, evidence that German parent Volkswagen's interest in producing zero-emission vehicles could extend to the very top end of its brands. The 54-year-old Italian car firm is already deviating from its tradition of producing high-powered, low-slung sportscars with its new sport utility vehicle, called Urus, itself a variation in its bovine branding. The SUV will be launched at the company's headquarters in Sant'Agata Bolognese, Italy, towards the end of this year, with deliveries starting in the second half of 2018. "Electrification is an area of great attention for us, but I'm not expecting it will happen in the short term," CEO Stefano Domenicali told Reuters at the Geneva car show, ruling out a purely battery-powered Lamborghini before 2025. "We need to be realistic," he said, pointing to the need to preserve the characteristics of a supercar in terms of handling, weight and performance even in an electric model, while at the same time considering its cost and the required investments. Lamborghini, one of VW's stable of superluxury brands along with Bentley and Bugatti, already plans to bring a plug-in hybrid version of the Urus SUV by 2020. Separately, the CEO held out the prospect of another record year for Lamborghini in 2017, powered by undiminished demand for super-luxury cars in the United States, China and Europe. The company was showing its new Huracan Performante in Geneva ahead of first deliveries in June, with the level of pre-orders already looking good, said Domenicali, the former head of Ferrari's Formula One racing team. The Huracán's Active Electronic Stability Control, believed to be the most advanced in the auto industry, keeps the car remarkably stable through every twist and turn and no doubt contributed significantly to the much debated recent Nurburgring lap record. The aeronautics style triple gyroscope, triple accelerometer inertial platform is the brain controlling the dynamic steering unit which adjusts the steering ratio, the magnetic ride control operating the suspension system, power flow through a Haldex gen V hydraulic centre differential four-wheel drive and brake torque vectoring systems. Adapting Lamborghini's inertial platform to an AWD electric powertrain would unlock an entirely new level of high performance active dynamic control. "Since the financial crisis, the market for super sports cars has seen a constant recovery," he said. "For the medium term, I don´t see a change in that substantially positive trend, especially since economic regions like the U.S. and China are showing unchanged growth." Domenicali said he expected sales this year to increase by a single-digit percentage rate from last year's record 3,457 deliveries. Future shipments for sportscars would be capped at around 3,500 a year but could go slightly higher as the market expands to a maximum of 3,800, to safeguard the brand's exclusivity, he added, although the Urus SUV could double overall production volumes. "We will be prudent. Of course we will grow sustainably, but being in the luxury market we must not take every growth potential that is there," he said. Depending on demand the Urus could add at least another 3,500 vehicles to Lamborghini's total output, he added.