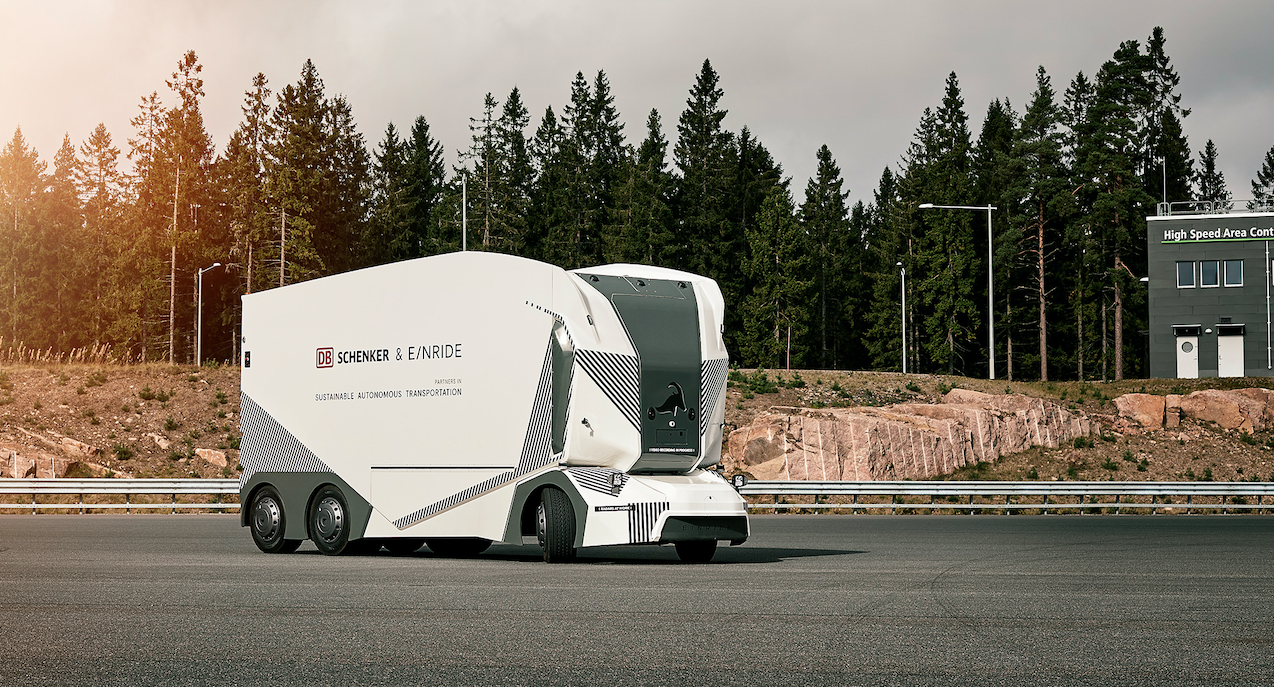 In what is claimed to be a world-first, truly driverless delivery trucks began transporting goods between a warehouse and a terminal along public roads today in Sweden, May 15.The electric trucks, built by Swedish startup Einride and featuring no driver's cab or conventional controls, are monitored by an operator stationed miles away, who can supervise and control up to 10 of the autonomous vehicles at once. They are currently working for DB Schenker, a German logistics company.Read More:

Claimed to boast Level Four autonomous technology, the vehicles look like any other haulage truck on the road, as they have nowhere for a driver to sit and no controls. Instead, they are simply a large container on wheels, complete with all of the cameras and sensors you would expect from a driverless vehicle.Removing the cab reduced road freight operational costs by around 60 percent compared to a conventional, human-driven diesel truck, Einride claims.Called the T-Pod, the driverless truck built by Einride weighs 26 tons when fully laden. Although an impressive technological feat, the route they are currently driving on is short — and slow.The vehicles only have permission to drive a short distance between a warehouse and a terminal on a public road in an industrial area of Jönköping, between Gothenburg and Stockholm in southern Sweden. They are also limited to driving at just 5 km/h (3 mph), little more than walking pace.Robert Falck, chief executive of Einride and a former Volvo executive, said: "Heavy road transport is responsible for a substantial part of global CO2 emissions. The pilot in Jönköping is a small but important step towards a sustainable transport system. The permit from the Swedish Transport Agency is an important testimonial to the safety of the solution."Falck hopes to expand the company's operations to the U.S. "Ground zero for autonomous vehicles is the United States. I think it will be the first market to scale when it comes to autonomous vehicles," he said.Based in Stockholm, Einride was founded in 2016 and has received a total of $9.1 million in funding to date, according to its Crunchbase profile.The company is now looking for a manufacturing partner to help it scale up its business, as its focus for now is on improving its autonomous technology and not mass-producing its own trucks.While driverless cars manage to steal most of the limelight, it is believed autonomous trucks could see mass adoption first. This is partly down to trucks generally following simpler routes, which are regularly repeated and feature fewer variables than the random journeys taken by cars and taxis, often through complex city center road networks.Jochen Thewes, chief executive of DB Schenker, said at the first demonstration of the T-Pod vehicle: "Autonomous trucks will become increasingly important for the logistics sector. Together with Einride, we are now able to introduce autonomous, fully electric trucks to a continuous flow on a public road – a milestone in the transition to the transport system of tomorrow."Fellow Swedish firm Volvo began autonomous truck journeys of its own back in November 2018, but these used regular trucks with autonomous driving technology fitted to them. The vehicles were also restructured to only drive in and out of a mine, and away from public roads.Caterpillar, the construction equipment company known as CAT, also produces autonomous mining vehicles, including self-driving trucks used to transport raw material out of open mines.Despite the departure of Uber in 2018, the autonomous truck industry is as hotly contested as the driverless car space. Companies like Waymo, Embark, Mercedes, Tesla and Volvo are all working to create self-driving haulage vehicles.